Clare Yazbeck is a writer and photographer based in Co. Clare. She writes about slow living, food and creatives at www.slow-diaries.com and on Instagram @slowdiaries. This piece first appeared on her blog which we highly recommend you check out. 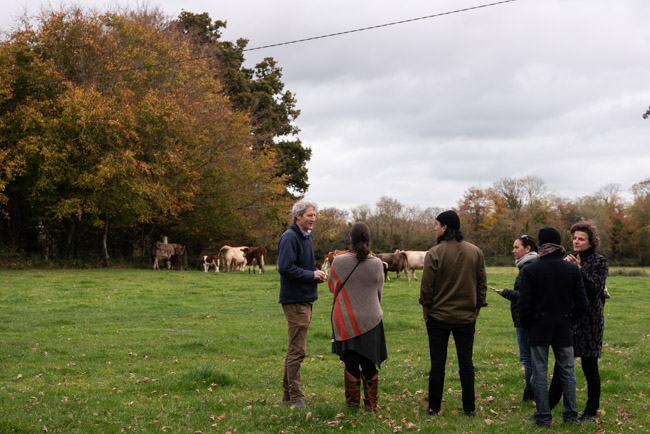 When I think of some of the best conversations I’ve had, they are defined more by the questions they have raised than any neat solutions they’ve offered. Finding the space to come together to ask searching questions, to listen, to be challenged, to make connections and build relationships, sometimes in the unlikeliest of places, seems to be more important than ever these days.

In October, people from around the world gathered to create just this kind of space at the Food on the Edge symposium in Galway, on the west coast of Ireland. The symposium aims to challenge our perspectives on food and our connection to it, and features TED-style talks by speakers chosen for their innovation, passion and influence on contemporary food culture. This year focused on the power of conversations to transform the way we relate to food and each other. The conversation continued afterwards as the speakers spent two days visiting local Irish producers and attractions. 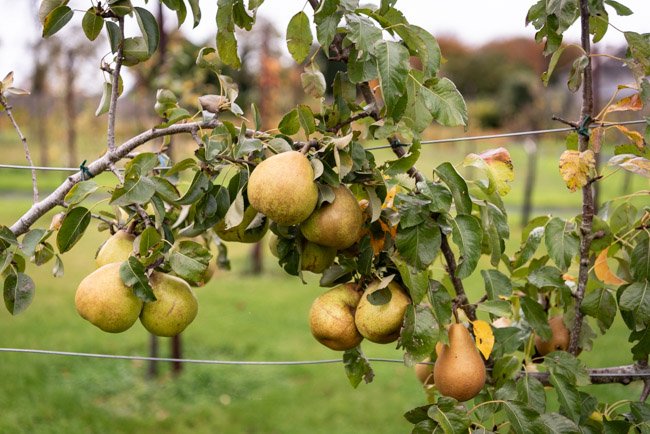 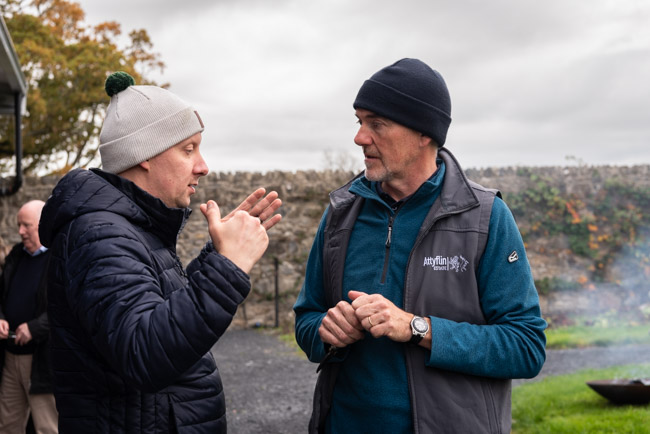 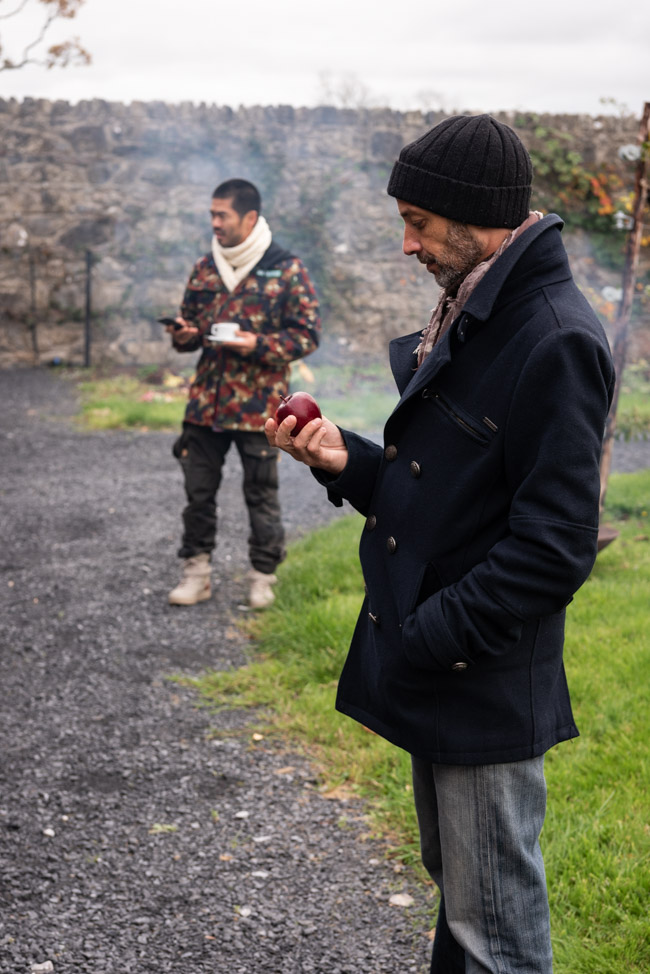 Often our first experience of other cultures is through food. Instinctively, we know that the relationship that people have with food tells us a lot about who they are and how they live. And yet, if we had to explain our own food culture to someone, would we know how? Could we trace how our relationship with food is shaped by our culture?

These are some of the questions that Adrian Klonowski and Matylda Grzelak posed as they shared their story of closing their successful fine dining restaurant in Poland to start again from scratch. Despite trying to promote Poland and its produce, Klonowski and Grzelak realised they had adopted popular Nordic and fine dining trends that did not ring true. They explained that in Poland, dining is more informal and centred in the kitchen where people cook, talk and eat together. They remembered that it was these authentic experiences they sought out when they travelled, and felt that people who dined with them were missing.

Unexpectedly, it was working at a restaurant on an island in Estonia that helped Klonowski and Grzelak find a way back to their Polish food culture. Faced with the challenge of creating a menu with limited ingredients and understanding of the Nordic islands, they constantly asked questions. Very quickly, stories emerged that revealed to them that customs convey the food identity of a place or culture. For example, they encountered the mealtime greeting jätku leiba, which means “may your bread last”. As they asked more about it, they learned about the custom of guests bringing bread as a gift, especially when visiting from the mainland. The limited ingredients on the island meant bread was important and needed to last when other food was scarce. It is with this philosophy that Klonowski and Grzelak will open their new restaurant in Poland to promote and keep Polish customs alive.

This was echoed by Russian chef Vladimir Mukhin, who spoke about how an import embargo forced him to source produce solely within Russia and ended up making him an advocate for Russian food culture. At first, he was seeking local produce that would meet his high standards but as he formed relationships with farmers and met Russian elders, he deepened his understanding and appreciation of Russian food traditions. Mukhin became inspired to share this with others more broadly by celebrating and saving Russian food traditions, creating new trends for modern times, and promoting Russian cuisine at home and abroad through festivals and open kitchens. 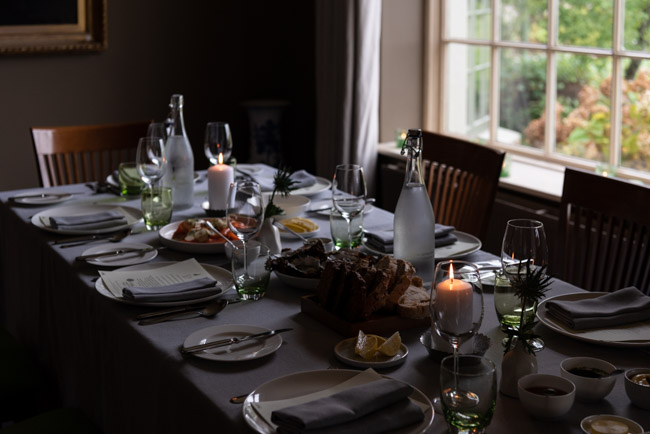 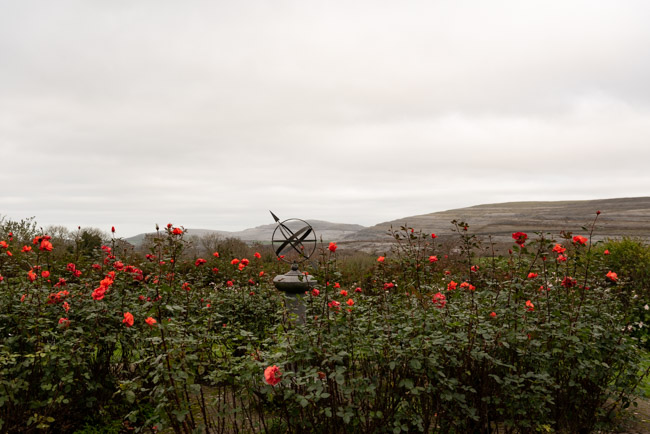 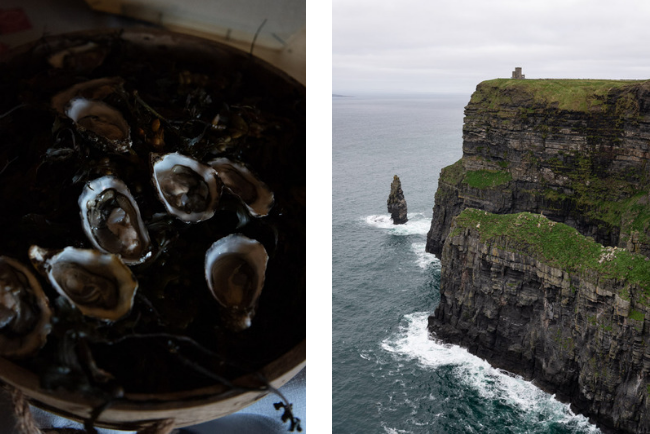 Flaggy Shore Oysters and the Cliffs of Moher which are both located in Co. Clare – Photography by Clare Yazbeck.

In contrast to the Polish and Russian speakers, who spoke of rediscovering what they have, a Japanese chef, Takashi Miyazaki described his experience of cultural exchange here in Ireland. By applying Japanese techniques to Irish ingredients, Miyazaki has found a way to embrace both his Japanese heritage and his new home.

When he arrived in Ireland in 2008, Miyazaki was surprised by the lack of local appreciation for seafood and seaweed compared to Japan, given Ireland is also an island nation. Yet he also saw opportunities to work with the abundance of excellent seafood and types of seaweed not encountered in Japan.

Miyazaki has found a receptive local audience and industry recognition by showing the potential of seafood that had been undervalued in Ireland. While Food on the Edge director JP McMahon and other Irish chefs are also championing Irish produce, McMahon reflected that “sometimes it takes people from outside to teach us what we have”. 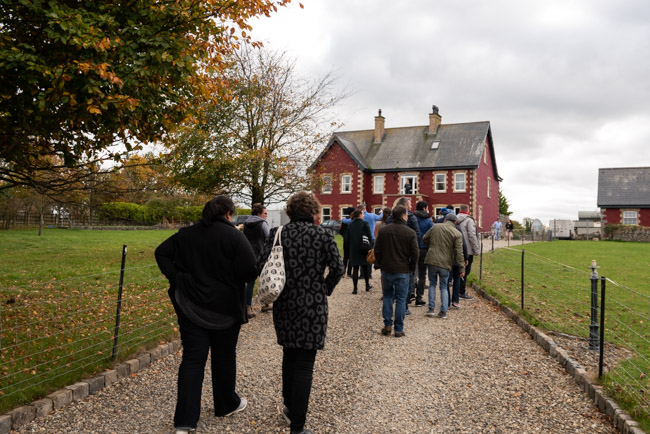 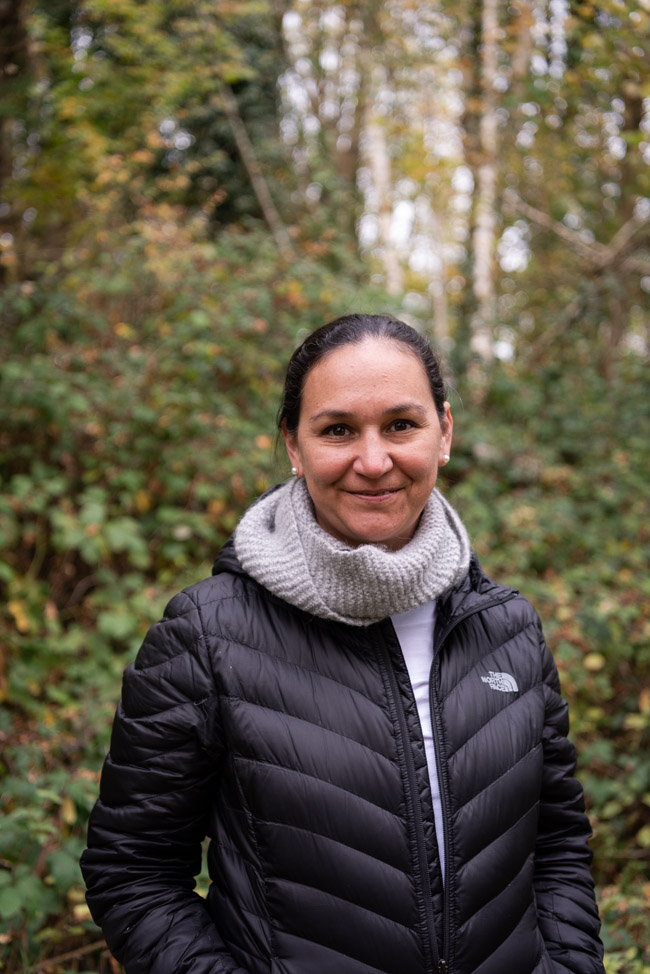 The desire to not only find and share one’s food culture, but also shape it, was another theme of the symposium. Some of the most compelling conversations were inspired by speakers who showed the potential to transform the way we live by changing our relationship with food. They saw beyond individual cultural heritage to advocate for a shared inheritance of our environment and dignity as fellow humans.

Karissa Becerra’s non-profit organisation, La Revolución asks why a country with a strong food culture like Peru can have both increasing child malnutrition and adult obesity. Becerra and her team are building early intervention programs to create lasting social change by empowering children to become responsible consumers who choose good quality, healthy and delicious food while also being conscious of their environmental impact and cultural heritage.

For example, in recognising that the palate is the best weapon to guard against poor food choices, La Revolución has examined how to avoid dependency on refined sugar from early childhood. Its ChocoRevolución program teaches children the process of making chocolate and the health and taste benefits of good quality dark chocolate, and the difference they can make by supporting Peruvian biodiversity and farmers of native cocoa beans. Becerra is enthusiastic about how children understand these concepts and change their habits immediately, while also becoming advocates in their families and communities. 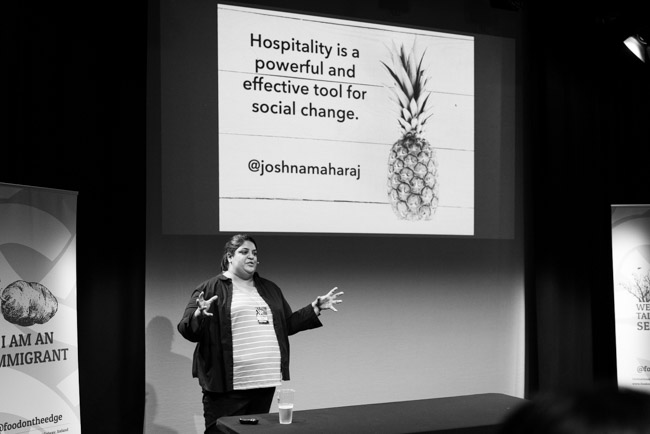 Joshna Maharaj, Take Back the Tray – Photography by Clare Yazbeck 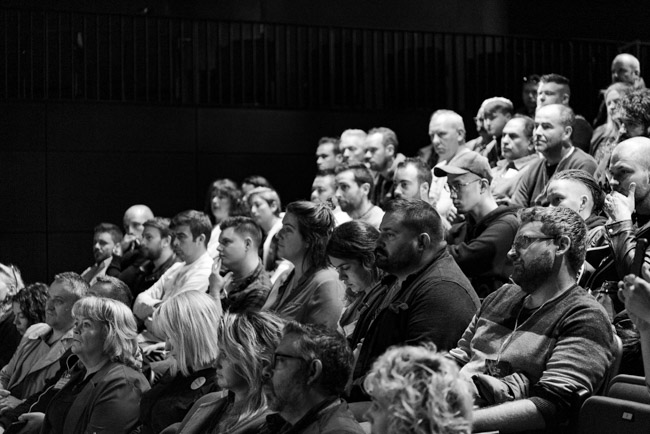 Food on the Edge symposium – Photography by Clare Yazbeck

Another chef and activist, Joshna Maharaj inspired many at the conference with her conviction to transform the way food is produced and served in public institutions in Canada. Maharaj lamented the deterioration of institutional food to become an industrial process left to the lowest bidder, rather than being valued for its role in nurturing health and wellbeing. Through the Take Back the Tray campaign, she is championing a philosophy that good food can be healthy, delicious and pleasurable; and for a return to the principles of hospitality and human dignity for people in our care.

Maharaj has faced considerable resistance from asking hospitals and universities to return to making food from scratch. While common in the restaurant world, it was controversial for Maharaj to call for sourcing produce from local farmers and small businesses, offering seasonal and culturally appropriate food for diverse populations, upskilling catering staff to cook again after years of de-skilling from using pre-prepared food, and taking staff on field trips to local farms. Like Becerra however, she has found that staff become engaged advocates when they realise the opportunity to take pride in their work and support their community, with one staff member saying, “I would be so proud to serve these greens to our patients”. 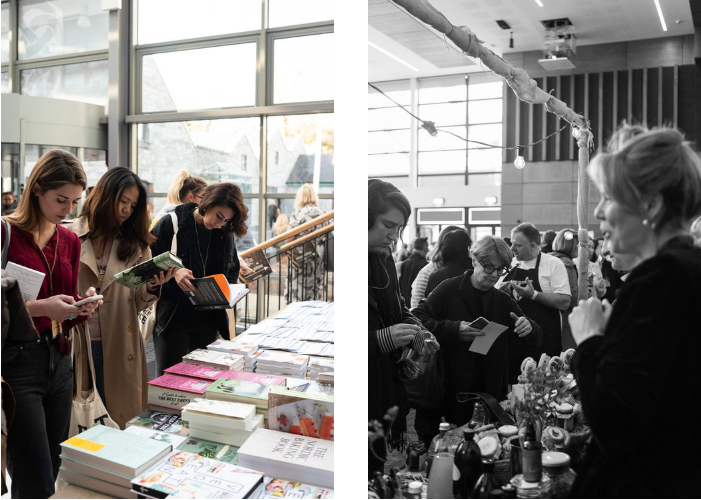 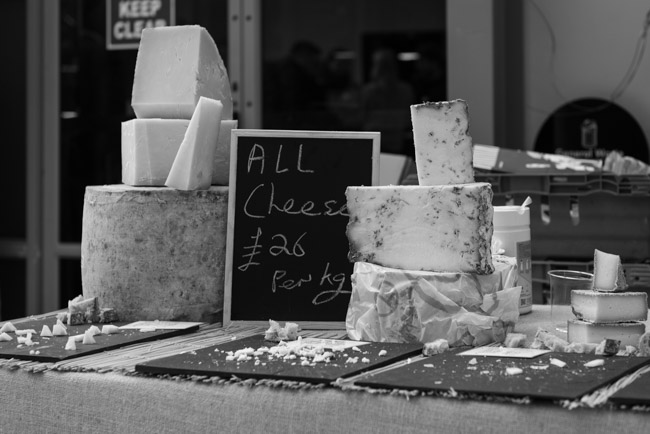 Another compelling conversation centred on transforming our relationship to food by eliminating waste. Several chefs and producers showed how they are leading the way by asking themselves how they can reduce their own ecological footprint and also use their creativity to shift public perception about what is possible. Some speakers were provocative in declaring that waste is a lack of imagination, but many have also begun by making small changes where they are, just like we can at home.

Two pioneers are Doug McMaster and Dan Gibeon of Silo Brighton, the UK’s first zero-waste restaurant. At Silo, they eliminate waste production at every level of their restaurant by trading directly with small suppliers, recycling and reusing containers for food and furniture at the restaurant, processing food as much as possible on-site, composting their organic waste on-site and sending it back to farmers to close the loop.

While beyond the means of the vast majority of restaurants and homes, McMaster and Gibeon are showing how creative we can be to eliminate waste. They led an inspired masterclass on the Alexander plant to demonstrate how they use different parts of this wild plant across the seasons to make everything from oils to ice cream, cocktails and pickles. They even shared canapés they had made using the Alexander plant and crackers using excess sourdough starter culture. 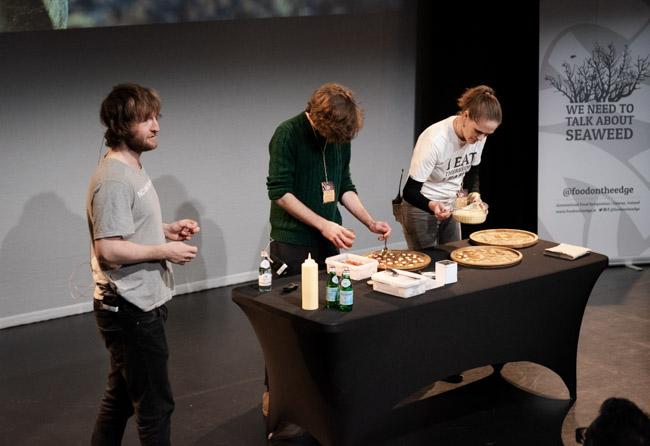 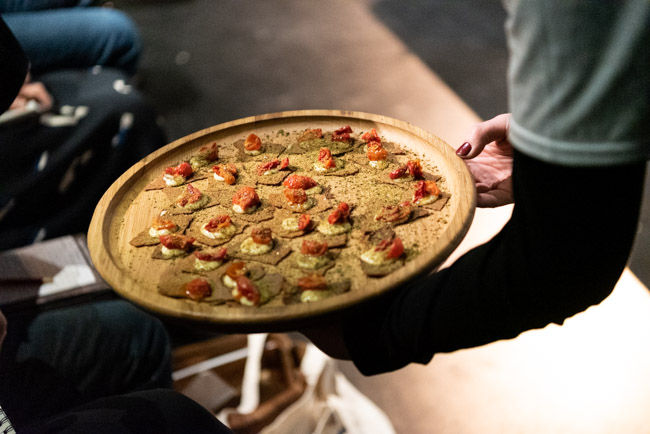 Spanish chef, Albert Adrià is also harnessing creativity to address rapid decline of fish stocks and species. He spoke about seeking alternatives to using seafood that is endangered or out of season by inventively using elements that would otherwise be discarded (such as octopus and monkfish heads), and learning from other cultures that do use those parts in their cuisines. Adrià is promoting these methods in his own restaurants to demonstrate ways to make the most of seafood trimmings that would normally be discarded, and to give them what he described as more dignified treatment.

At the other end of the process, Irish Seed Savers and Brown Envelope Seeds are working to educate people about the value of seeds to avoid the loss of Ireland’s native fruit and vegetable varieties. They are conducting seed trials to compare different varieties and identify what grows, stores and tastes best across the seasons. Their aim is to open up a conversation with chefs to share these varieties and understand what chefs want to cook with so that those seeds can be produced and promoted, and so consumers will recognise the taste and value of that produce and want to protect it too. 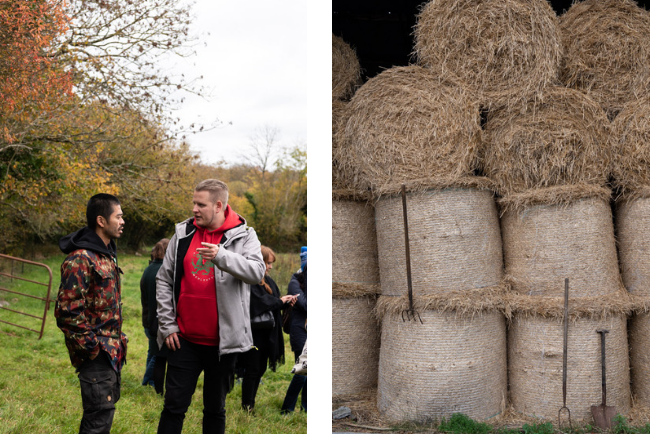 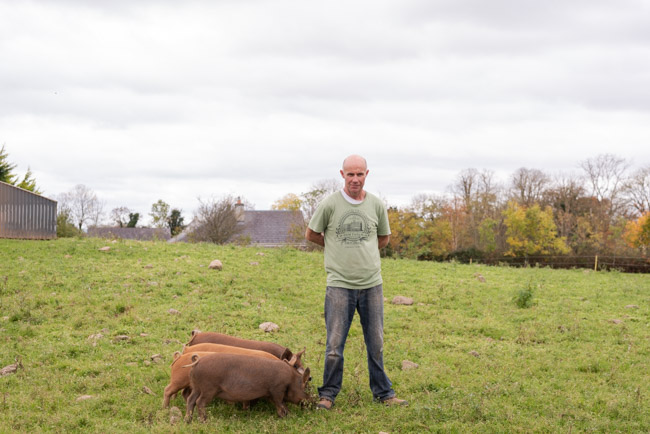 These stories from Food on the Edge show how coming together to share our diverse perspectives can build relationships, make connections and create change. Some found great inspiration in rediscovering and celebrating their food heritage and sharing it, while others looked to a collective inheritance that transcends borders via the themes of health and wellbeing, human dignity and sustainability. They all showed that we have the power to influence the way we live through our choices and questions. In this light, we can see that culture works both ways – it is an inheritance that we all receive and also an obligation we have to participate in and shape. We don’t need all the answers, we only need to join the conversation. 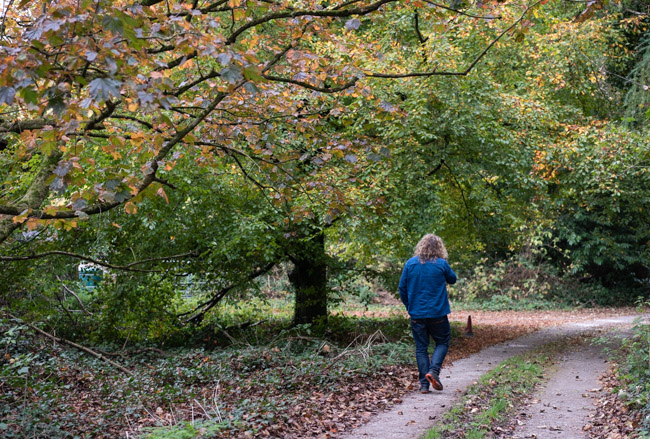 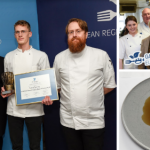 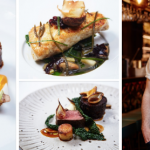