Four new world renowned chefs announced to speak at Food On The Edge: ‘The G8 Summit of Food and Food Culture’:

The expanding line-up continues to build on excitement ahead of the Food On The Edge event taking place in Galway in October. For the first time ever in Ireland and UK over 40 of the best international chefs and 350 attendees each day will converge for a dynamic symposium consisting of talks, presentations, networking, entertainment and  knowledge sharing.

International chefs Elena Arzak, Alyn Williams, Riccardo Camanini and Niko Romito have just been just been added to the line-up and will speak on various topics to do with the future of Food.

Elena Arzak who has been described as “the best female chef on the planet” is joint head chef of three Michelin starred restaurant Arzak in San Sebastian alongside her father, Juan Mari Arzak, and was named best Female Chef in the World in 2012. Arzak is credited with putting San Sebastian on the culinary map, the city boasts more Michelin stars per square meter than anywhere else in the world!  “What we eat, how we eat, is in our culture,” she says “Our signature cuisine is Basque. My father and I talk about this all the time. Our taste is from here even if we are open to the world. We were born here. Since childhood we have in our minds a flavour: parsley, squid, hake throats. Even if we use herrings or tandoori, we cook unconsciously with this identity.”

Alyn Williams, who is head chef at the Westbury Hotel in London spent five years as head chef at Marcus Wareing’s restaurant in the Berkeley hotel, cooking some of the best food in England. At Food on the Edge, Williams will speak about Nostalgia and the importance of nostalgic food memories in our innovative process. His talk will ask the question what happens to a generation where nostalgia will be missing through lack of home cooking?

The cream of Italian cuisine is represented by two award winning chefs – Riccardo Camanini, chef of Lido 84 restaurant in Gardone Riviera in Lake Garda (one Michelin star) and Italian three-Michelin-star chef Niko Romito of the Reale restaurant in the Abruzzo region.His simple cuisine is inspired by the scenery and ingredients of the Abruzzo mountains, an area not previously celebrated for its gourmet credentials.  “This was never a rich region” Romito says “but it helped me form my ideas on cooking. I had onions, pecorino cheese, and wanted to create unique emotions. My work on offal – tongue, sweetbread, and tripe – started because I only had low-cost, primary ingredients at my disposal. The onion became my foie gras!”.

Food On The Edge is the brainchild of JP McMahon, owner of the EatGalway restaurant group which includes Michelin-starred Aniar Restaurant in Galway.  JP is also the “Cook It Raw” Ambassador in Ireland, which has seen him attend and participate in international food events in USA, Mexico, Finland, Canada and other countries.  It was through this involvement that the idea for “Food On The Edge” was sown.

Speakers and attendees confirmed for the event reads like a who’s who in the restaurant world. Flying in from San Francisco, Mexico, Singapore, Denmark, Sweden, Spain and many other places not least, the UK, they are coming to converge, speak and attend the event

The main talks will be held in a marquee tent located in Galway city centre.

Tickets are available for one day and two day admission which includes lunch. The two day ticket is inclusive of the wrap party on Tuesday 20th which takes place in Electric Garden.

Full line up of speakers and ticket purchases available via www.FoodOnTheEdge.ie 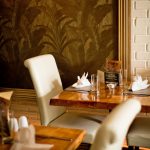