A newly developed pub and restaurant called John Keogh’s – The Lock Keeper has opened in the heart of Galway in the city’s west-end. The new gastropub was developed by Matt Hall, a Galway resident who also owns MacBride’s Bar in Westport.

In creating John Keogh’s – The Lock Keeper, every detail was looked at from the viewpoint of their target clientele.  The area has two bars and one private party area located all on the ground floor. The bars are filled with snugs and partitions to give the customer a sense of coziness along with the atmosphere of a larger venue with multiple spaces that will suit various sizes of gatherings – a quiet corner-seeker or a post work get together. The bars are filled with genuine pub antiquities that Matt individually sourced from multiple pubs, antiques shops and scrap yards around the country. Original mirrors hang on the walls that previously adorned other pubs of days gone by; many date back as far as 1910.

Up to 15 local contractors were involved in the build including the specialist pub design company, Galway-based Arthaus which worked on the design, carpentry and paint effect.

Matt said, ‘We put a huge emphasis on the designing of the pub from the customer’s view. We are passionate about original Irish pub culture so we hope that people who enjoy that unique experience will love our pub – it has been designed by traditional pub-goers for pub-lovers.”

While the concept was in development for over 12 months,  the build itself began the day after the licence was granted in February 2016. Two bars, which stock over a dozen craft beers, numerous craft whiskeys and gins, along with all of the mainstream beverage products, and a full equipped kitchen were all built from scratch. The second stage, a private party area, is due for completion at the end of June 2016.

Food is a major part of the business with Pat McEllin, whose previous role was that of Head Chef in the  Latin Quarter Bistro and sous chef in Kirwin’s Lane Restaurant, is leading the team. The menus change regularly with all the emphasis being on local and fresh. The menu offers a selection of small plates and larger plates including Mini Beef & Chorizo Burgers, Lamb Belly, Herterich’s Pork Pudding, Braised Lamb Shoulder and Flat Iron Steaks.

The private area can cater for up to 180 people. Gastropub-style fayre is served from 5- 9pm, seven days a week. 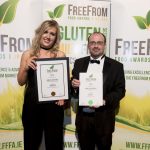