Davide Scabin tells what he will be talking about at Food On the Edge 2015, he says “The Golden Ratio: a.k.a. the God’s number, it has always fascinated artists and intellectuals since the ancient Egyptians and has now entered the kitchen with me (Davide Scabin). This mathematical perfection becomes beauty and harmony on the plate.”

Food on the Edge is a two day symposium for chefs & food enthusiasts all around the world. It is a coming together of chefs to listen, talk, debate and network over two days in Galway.  Open to the public.  19th & 20th October 2015 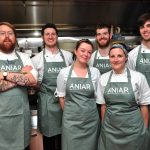