It’s only been open since February this year, however already Cask Bar & Kitchen in Cork’s Victorian Quarter on MacCurtain Street has racked up a number of leading industry awards and distinctions, not least winning Cocktail Bar of the Year at the 2017 Sky Bar of the Year Awards announced on the 21st of August. The Sky Bar Awards are the premier licensed industry awards and Cask triumphed against eight other shortlisted finalists in the same award category.

Reacting to the 2017 Sky Cocktail Bar of the Year award win, Richard Evans of Cask and neighbouring sister venues Greenes Restaurant and Hotel Isaacs said, “We are absolutely delighted with the award. It’s a great tribute to Cask manager Andy Ferreira and all the staff in Cask who have worked so hard to achieve it. A lot of credit is due to the design team and all the management team in Hotel Isaacs and Greenes Restaurant. I believe this award is great for the Victorian Quarter and Cork generally.”

Two mixologists at Cask have also been outclassing their fellow cocktail-makers on the buoyant bartending competition circuit, led by Cask manager Andy Ferreira who, following on from winning the World Class Irish Bartender of the Year contest in June, participated at the Global Finals of the World Class contest held in Mexico City between the 21st and 24th of August.

Indicating the outstanding cocktail-making talent employed at Cask, on the 23rd of August, bartender Brian McGrory was declared the overall winner at the Irish final of the Opihr World Adventure Cocktail Competition. This was Brian’s first competition and saw him competing against some of the best bartenders in the country. Brian will join nine other finalists from around the world in Morocco this September to battle it out with his signature Vasco cocktail for the title of the 2017 champion, and an additional prize trip for two to a mystery location on the Opihr spice route.

Right: The Cask team celebrating their Cocktail Bar of the Year Award win at the 2017 Sky Bar Awards. 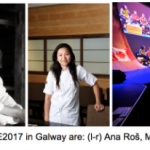 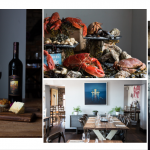