The groundbreaking food symposium Food On The Edge is taking place next week on Monday the 24th and Tuesday the 25th of October, drawing over fifty of the biggest international and national names in gastronomy to the stage of Galway’s Town Hall Theatre.

An audience of around 500 people on each day will attend the event to hear the distinguished speaker line-up debate and discuss themes around the future of food in a Ted Talks-style format.

The speaker line-up boasts visionary chef Massimo Bottura of Osteria Francescana, Italy, which is number one this year on the prestigious San Pellegrino World’s 50 Best Restaurants list. During the Rio Olympics in August, Bottura co-founded Refettorio Gastromotiva, a community kitchen that took surplus food and created nutritious and tasty meals for those in need. At Food On The Edge, Bottura will speak on the topic, ‘Cooking Is A Call To Act’.

Panel discussions will also take place including one on the topic of the Future of Irish Food with Michelin-starred Belfast-based chef Danni Barry, award-winning London Irish restaurateur Robin Gill; winner of the Great British Menu 2013 Raymond McArdle and sea vegetable advocate and medical doctor Prannie Rhatigan. International delegates will debate the ‘Future of Canadian Food’ as well as the ‘Future of Australian Food’.

Other delegates hail from as far away as Peru, California, New York City, the Middle East, the Philippines, Moscow, Scandinavia, Paris, Barcelona, the Netherlands and Germany.

JP McMahon,  symposium director, said, “Last year’s symposium was a huge success, contributing over €500,000 to the local economy. This year aims to build upon that and shine an international light on our wonderful Irish produce. I believe the future is bright for Irish food.”

A Wild Atlantic Way Artisan Food Village  will showcase 60 Irish food producers, and it will take up residence at the front of the Town Hall Theatre on Courthouse Square for the duration of the symposium.

John Mulcahy Head of Food Tourism for Fáilte Ireland, and a supporter of Food on the Edge commented “With interest in the combination of food and tourism in explosive mode, there is no doubt that Food on the Edge is helping to change international perceptions of Ireland’s food while also raising the gastronomic profile of Galway, the Wild Atlantic Way and Ireland on a global scale. Ireland’s food movement is coming of age, and this is evident in the current levels of activity relating to food, and the interest around local food and traditions.  As a result, there is much happening and much to be proud of, and Food on the Edge is symptomatic of that. In Fáilte Ireland, we are delighted, not only to support this important symposium for a second year, but also to welcome all of the symposiasts, many of whom are visiting Galway or Ireland for the first time.  They will discover food and produce that is world class, young Irish chefs full of ideas and ambition, and Failte Ireland food champions who promote local and sustainable food practices.”

After the two days of talks speakers will be taken on a special Food On The Edge excursion to Cong Village hosted by Ashford Castle and The Lodge at Ashford Castle on the Wednesday following the event, where they will get to sample the best local produce from this part of the 2018 European Region of Gastronomy. 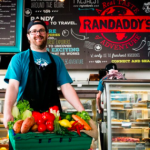 Learn To Cook Your Way Around The World With Randy LewisNews 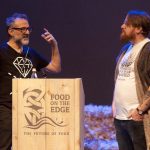 Cooking is a Call To Act: Food On The Edge 2016News